The men and women of Polk County Fire District No.1 would like to thank you for viewing the District’s web-page. The purpose of the web-page is to provide information about the District; its staff and members; and the services we provide. In addition, the web-page is also designed to serve as a source for the public to find injury and fire safety prevention information, on how to become a Volunteer or Resident Intern, employment opportunities, District calendar of events and important resource links. We hope you enjoy the information that is provided and will continue to utilize the District’s web-page for your future needs.

Polk County Fire District No.1 is a combination Career and Volunteer Fire District comprised of four fire stations covering 185 square miles serving a population of approximately 26,000 people in Southeast Polk County and Western Marion County. Designated land uses are varied ranging from urban and suburban areas of Monmouth and Independence, to rural, farm and forestlands in surrounding unincorporated areas.  The cities of Monmouth (Pop. 9,855) and Independence (Pop. 9,340) form the heart of the District, with the communities of Buena Vista, Suver, Airlie, and Pedee forming the rural areas. Some of the major features of the District include Western Oregon University, Independence Airport, the Willamette River, small downtown areas, and city parks that host events.

Polk County Fire District No.1 has four fire stations. Volunteers staff three of these stations completely. Station 40 is located in Buena Vista and has been closed for several years but is now reopen. Station 80 is located in Airlie, Station 70 in Pedee, and Station 90, (the Central Station) in Independence. The District also has Support, Special Services, and EMS only Volunteers.

Station 90 is the only station in the District that is staffed 24/7 with three shifts. Each shift is comprised of a Captain/Paramedic, and three Firefighter/Paramedics on duty for 24 hours a day. Not only are there career personnel and home responding volunteers at Station 90, but there are also Resident Volunteers who are students pursuing carrers in fire and EMS and are assigned rotating schedules when they’re not in class. The administrative office is also housed in Station 90.

Polk County Fire District No.1 is organized as a Special District under ORS 478. It is the result of the merging of Independence Fire Department, Monmouth Fire Department, Southeast Polk Rural Fire Protection District, and the Pedee Community Volunteer Fire Department. The District is governed by an elected five-member Board. The District’s permanent tax rate is $1.5038 per $1,000 of assessed value, an operating levy of .19 cents and a General Obligation Bond. 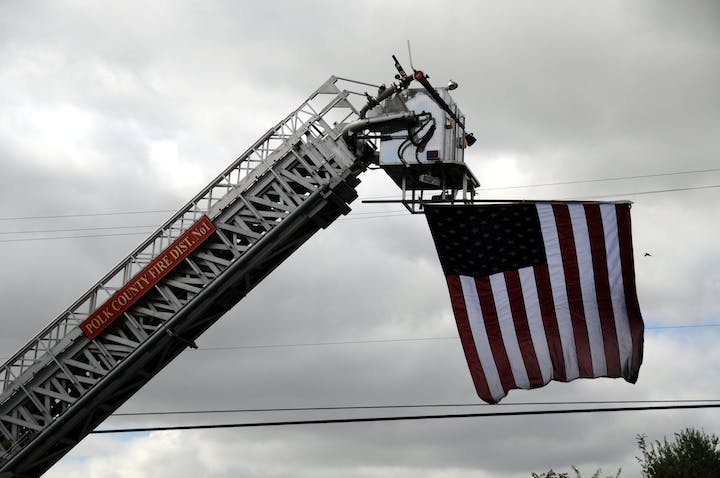 Serving, because we care.